Gambling > News To Know > ‘I should be dead’: Gambling addicts in recovery describe how it can destroy lives

‘I should be dead’: Gambling addicts in recovery describe how it can destroy lives 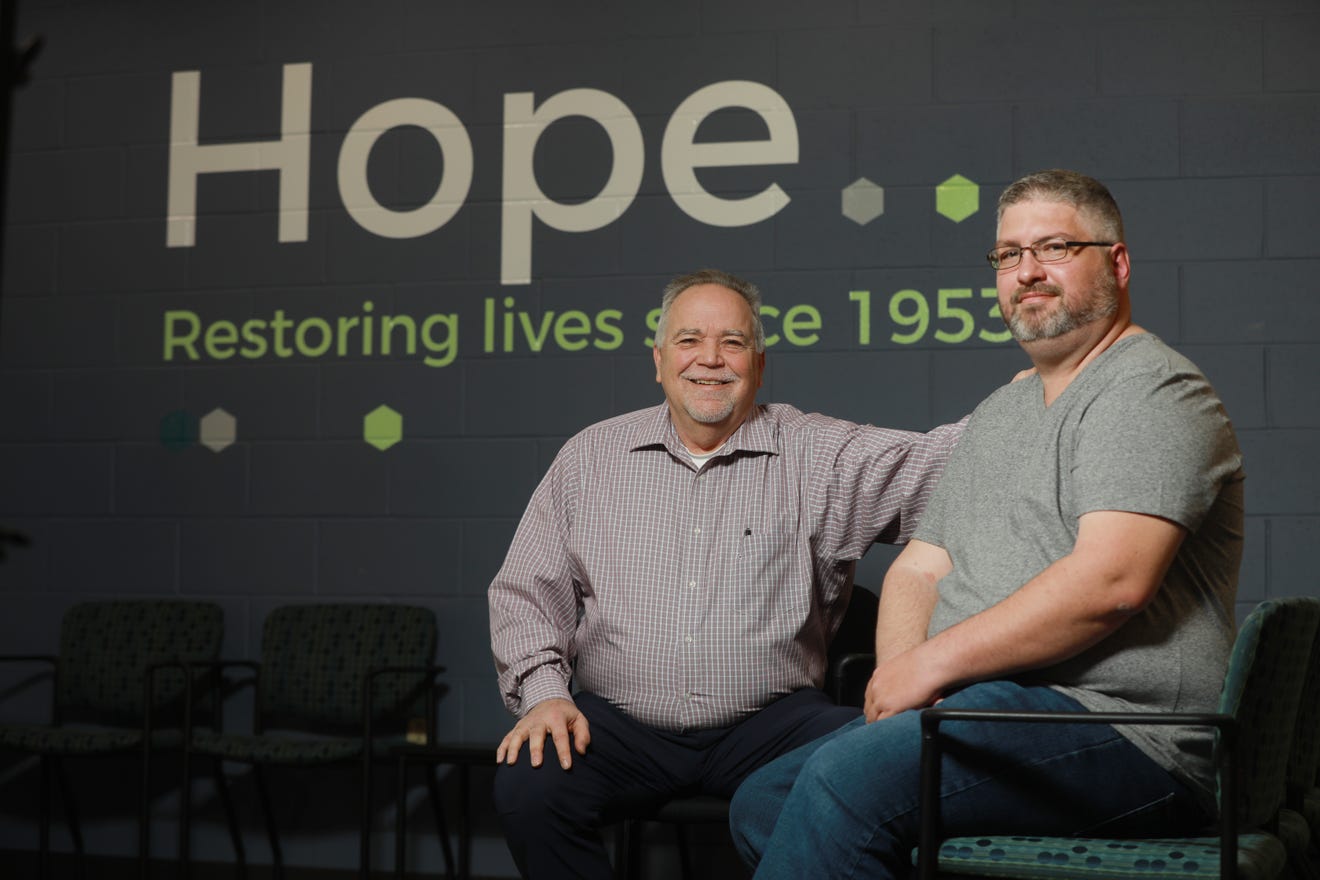 By Ken Gordon
The Columbus Dispatch

Six years into his recovery for a gambling addiction, there still are days when Mark Moore sits on the razor’s edge of relapse.

Take this past Monday, for example. Moore was in the car, on the way to his weekly counseling session at Maryhaven, when his brakes started acting up and an engine light came on.

“Now I have to spend money I don’t have to repair that, so a lot of stress came up, and my immediate thought was, `Well, you know how to get some money real quick,’” said Moore, a Reynoldsburg resident. “And then I was like, `That’s stupid. … I’m heading to talk about recovery and I’m thinking, Oh, I can fix this money issue right now.’

“It never works that way.”

Moore would know. The 40-year-old has battled addictions for decades — to drugs and alcohol as well as gambling. But of those demons, the gambling has been perhaps the toughest for him to shake.

He has gone on 24-hour gambling binges and lost whole paychecks within minutes of them hitting his bank account. He has had nowhere to live and survived on the largesse of friends and loved ones.

He has survived numerous suicide attempts.

And even as he fights the compulsive urges to gamble that continue to resurface, Moore now has found purpose in talking about his problem, in hopes that his story will help others.

“I should be dead multiple times over, to be honest with you,” he said. “But I’ve got a message to share, so that’s why I’m here.”

But for problem gamblers, the madness is not restricted to one month. And it could become an even bigger issue for some as Ohio lawmakers continue to consider legalizing sports betting in the state.

The psychiatric profession used to consider what it called “pathological gambling” an impulse control disorder. But about 10 years ago, the American Psychiatric Association officially reclassified gambling disorder as an addiction, equal to addictions to any substances.

That was important, as it recognized that problem gambling is more than just a willpower problem. Instead, the inability to walk away from a slot machine or roulette wheel now is known to be caused by changes in the brain that occur when addicted people are gambling.

“You can do a brain scan on someone using cocaine, and a scan on someone who spent the last 24 hours at a casino, and all the same parts of the brain are lit up,” said Stacey Frohnapfel-Hasson, prevention chief in the Ohio Department of Mental Health and Addiction Services’ Bureau of Problem Gambling.

What lights up the brain is dopamine, a naturally produced substance that helps people feel pleasure.

People addicted to drugs or gambling are getting a rush, or a high, from their behavior, which leads them to chase that feeling.

What’s interesting about gambling addiction is that the rush does not necessarily come from scoring a big win, but from the anticipation of what is about to happen — what numbers will come up on the dice or what combinations on the slot machine.

“Even those near misses register as a dopamine rush,” said Bruce Jones, the administrative coordinator of Maryhaven’s gambling intervention program.

‘I need help’: How one gambling addict reached a crossroads
Jess Stewart can relate. The 59-year-old resident of Streetsboro in Portage County has been in recovery for gambling addiction for almost five years.

He said his father introduced him to the horse track as a child. After his mother died when he was 17, Stewart said he fell into depression and began using trips to the track as a way of coping.

“Gambling made me feel good, it energized me,” he said. “But the urge to get back there to recoup your losses gets stronger. You’re constantly chasing your losses. It’s an insidious disease.”

Indeed, chasing losses is one of the key signs that someone has a gambling problem. Ohio officials have created a nine-question survey that can assess one’s risk of being a problem gambler on the site beforeyoubet.org.

Frohnapfel-Hasson said data suggests more than 900,000 Ohioans may be at risk.

Like Stewart, Moore also experienced that energy when he gambled. He described the feeling as like being on a rollercoaster with every spin or push of a button.

“You’re either going to win, and go down the hill and around and to another hill and get to ride again, or you lose and you slam into the stop,” he said.

Stewart fell deeply into addiction. He served a three-year prison sentence from 2000 to 2003 for theft to support his habit.

Even that didn’t stop him for good. He pinpoints that moment to May 2016, when he traveled to Las Vegas and went on an epic gambling binge.

“I looked at myself one morning and I was just a shell of a person,” Stewart said. “I felt like a total failure as a human and I was ready to end it all.”

Instead, he returned home, “and I fell on my hands and knees and told my wife, `I don’t know what’s going to happen with us, but I need help and if I don’t get it, I’m going to take my own life.’”

He entered treatment and has never looked back. He and his wife, Catherine, will celebrate 27 years of marriage this year.

Addicts can’t walk away
Moore, too, traces the beginnings of his addiction to trauma. He lost his grandmother when he was 10 and his father when he was 12, and that led him to escape into drinking by age 13.

As a teen, he said he used to play the board game Candyland for money.

“That should have been a sign,” he said, ruefully.

Over the years, drugs, alcohol and gambling consumed him. He kicked the drug habit first and said he hasn’t had a drink in four years.

Though he first sought help for gambling addiction early in 2015, he admits to several relapses since then.

But he has never sunk back to the depths he once was in: loaning money off his mother that he can never pay back, pawning everything he owned, moving in with a friend who responsibly paid the rent each month while he blew every penny he earned.

Often, he would be ahead after a win streak, but found himself unable to do the logical thing and leave. Moore said he felt at times as if he could hear his voice telling him, “Walk away, go home,” but his body was on autopilot, numbly pressing the slot machine button over and over.

“When they walk out that door, they say to themselves, `I’m a smart person, what did I just do?’”

And that’s why, Jones said, people addicted to gambling have a higher risk for suicide than those with any other addiction.

Mourning and helping others
Bill and Andrea McGovern are aware of this now, having lost their youngest child, Michael, to suicide at age 28 in 2014.

The residents of Mentor in Lake County said they raised their four kids in a loving, stable family. Mike and Bill enjoyed attending baseball games together, and he liked fast cars as a teen.

Their son’s gambling at first seemed normal — occasional trips to casinos with friends. But once he moved out of their house, they were not aware of how his problem was mushrooming.

A back injury and debilitating pain likely accelerated Mike McGovern’s slide, they said. Their son got treatment for his problem, but relapsed and killed himself in January 2014.

Bill and Andrea now are active advocates for awareness of gambling addiction, including helping with several programs in March for the Problem Gambling Network of Ohio.

“We do this because we both feel this isn’t a secret, we need to tell people,” Andrea said. “We had a really typical family, the kids had nice lives and were loved and we did everything we could, and this happened to us. People need to know this can happen to anybody.”

Moore said his low point came in January 2015 after he had a nasty argument with his children (now 22 and 21) and they stopped speaking to him.

“I was sitting on the stoop smoking a cigarette as fast as I can and crying,” he said, while once again pondering suicide.

His girlfriend found the program at Maryhaven and convinced Moore to give it a try.

Jones said treatment typically involves reviewing root cause as well as helping provide coping mechanisms to fight the urges to gamble. “Usually it’s a symptom of something going on in their life,” he said.

Paired with attending programs such as Gamblers Anonymous, Jones said the success rate for gambling addicts is “the same or a little better” than those dealing with chemical dependencies.

It has not all been “rainbows and butterflies,” for Moore since he entered treatment, he said. He admits to several relapses.

But like the McGoverns, he too is involved in advocacy now. He is determined to let people know there is no shame in seeking help, and that there is hope.

It’s all about resisting urges like he had last Monday and then doing it again the next day.

“My life isn’t perfect by any means,” he said. “but as long as I wake up every day and do the things I’m supposed to, I can not gamble that day.

Read the article at Dispatch.com