GET HELP NOW from Maryhaven!

Opinion: We resuscitate someone ‘literally dying from a drug overdose’ in lobby monthly

As published in The Columbus Dispatch
By Adam Rowan
Guest Columnist 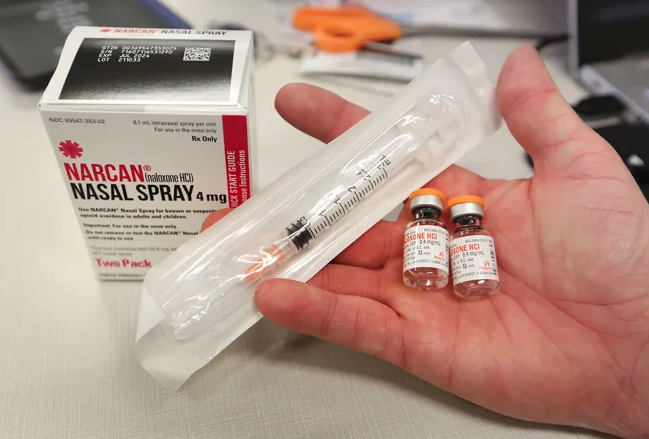 From The Dispatch: Two forms of Naloxone, a nasal spray and an intramuscular injection, are shown. Sandra J. Milburn/The Hutchinson News

Every month, we resuscitate someone in our lobby who is literally dying from a drug overdose. Without interruption, this process can lead to death.

Our team, like many first responders, has access to a drug called naloxone, which blocks the opiate’s effect on the brain and ultimately reverses the overdose.

Every overdose averted using naloxone, also known as Narcan, is a life saved and a chance at recovery.

That’s why the leadership team at Maryhaven strongly supports Senate Bill 296. This bill will save lives by making fentanyl test strips and naloxone more widely available.

Research tells us that harm-reduction strategies dramatically reduce overdose deaths. On the front lines of the opioid epidemic, we need every life-saving measure available.

Legislation enacted in Ohio in 2015 allowed pharmacists to provide naloxone without a prescription.

As noted, our team can personally speak to the efficacy of naloxone, both with our clients and as an active partner in the Ohio Department of Health’s Project Dawn effort, where we can provide free naloxone kits to the community.

Many, many people entered into treatment with us because naloxone kept them alive. And this is a reality across the state. Researchers at the University of Cincinnati found that the rate of overdose deaths statewide fell 14% after the 2015 law was passed while pharmacists increased the number of naloxone kits on the street by 2,328%.

The biggest boosts in availability were in communities with high poverty and unemployment rates.

Some worry that more naloxone on the street encourages people to use. Thankfully, this myth was thoroughly busted by a study published in October 2021 by Ohio State and Purdue universities. They documented that all Americans, including active drug users, are aware of the risks of heroin. People’s assessment of that risk didn’t change by knowing that naloxone was accessible. However, it can be a way to reassure friends and family that they could save a loved one’s life.

Harm-reduction strategies can work. For example, syringe access programs, commonly known as needle exchange programs, seek to reduce cases of hepatitis B and C and HIV among people who use or share needles to inject heroin or other substances. Not only do these programs decrease adverse health impacts, they are more cost-effective and associated with greater participation in treatment.

Decriminalizing fentanyl test strips also will save lives and money. Up to 100 times more potent than morphine, fentanyl is now often clandestinely integrated into drugs, such as cocaine, methamphetamine, counterfeit prescription drugs, and heroin.

Many people who use it are unaware that fentanyl is present. If they overdose, death descends rapidly and powerfully. Our staff is sometimes forced to use as many as three, four or even five naloxone kits to resuscitate a client.

Fentanyl contributed to nearly two-thirds of all overdose deaths between May 2020 and April 2021. The Centers for Disease Control concluded that fentanyl deaths have skyrocketed, climbing 33% in the Midwest.

These facts drove states like Arizona, Tennessee, Wisconsin and West Virginia to legalize at-home fentanyl rapid tests. Last year, the CDC and Substance Abuse and Mental Health Services Administration announced that any entity which received federal grant dollars from their agencies could use those funds for fentanyl test kits.

Maryhaven staff expect to make a significant difference by sharing fentanyl test strips with clients. But because Ohio law currently labels these kits as drug paraphernalia, to offer the kits now puts people at great risk for arrest and prosecution. Changing Ohio’s statutes is recognition that, in the battle of opioid addiction, we need every tool at our disposal.

Relapse happens, even for people who ultimately achieve long-term recovery. Our team at Maryhaven mourns every client lost to overdose. We can’t bring them back, but we can celebrate every person who lives to enter treatment.

Adam Rowan is the Chief Operating Officer of Maryhaven, a provider of drug, alcohol and gambling addiction treatment. He has served as the agency’s chief operating officer since 2018.